What Does DA Mean for Bloggers and Is It Important?

Written by James Parsons on May 2nd, 2020 in Blogging 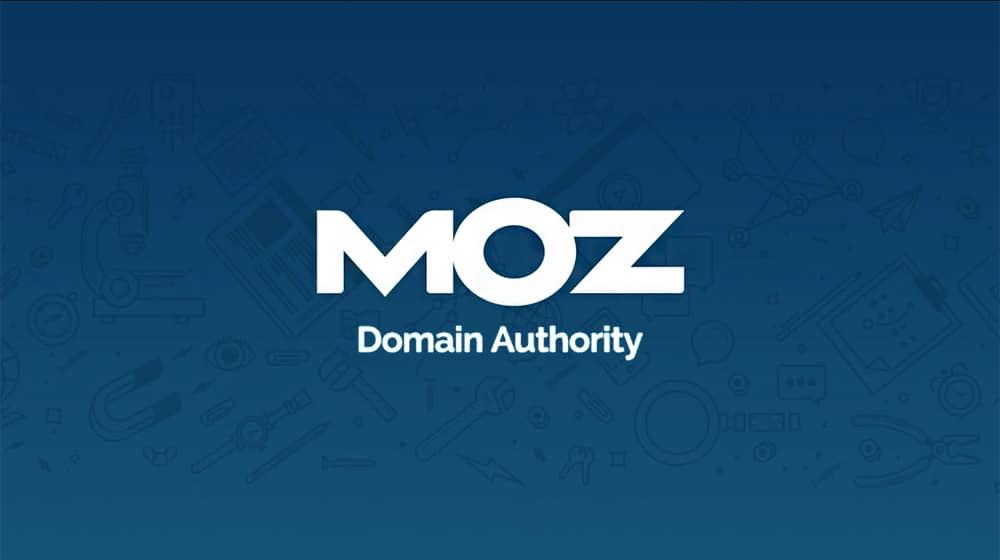 You’ve probably encountered the term DA, with a number beside it, as a blogger. While it’s usually used as a rating for links, you might also see it as a limitation on guest blogging submissions or on joining a community. Some webmasters brag about their DA, while others mostly ignore it. What is it, though, and how important is it?

Table of Contents
What Is DA?
My DA Went Up: Is That Good?
My DA Went Down: Is That Bad?
What is The DA Scale?
How to Use DA

DA stands for Domain Authority, and it’s a metric made up by the SEO company Moz a number of years ago. They created this metric as a sort of replacement to (and in response to) Google’s PageRank, when Google decided to remove the publicly visible PageRank metric.

Domain Authority is a ranking for your entire domain as a whole, that is, your website. This is in contrast to a complementary (but less useful) metric Moz produces, Page Authority, which only applies to a single given page on your site. 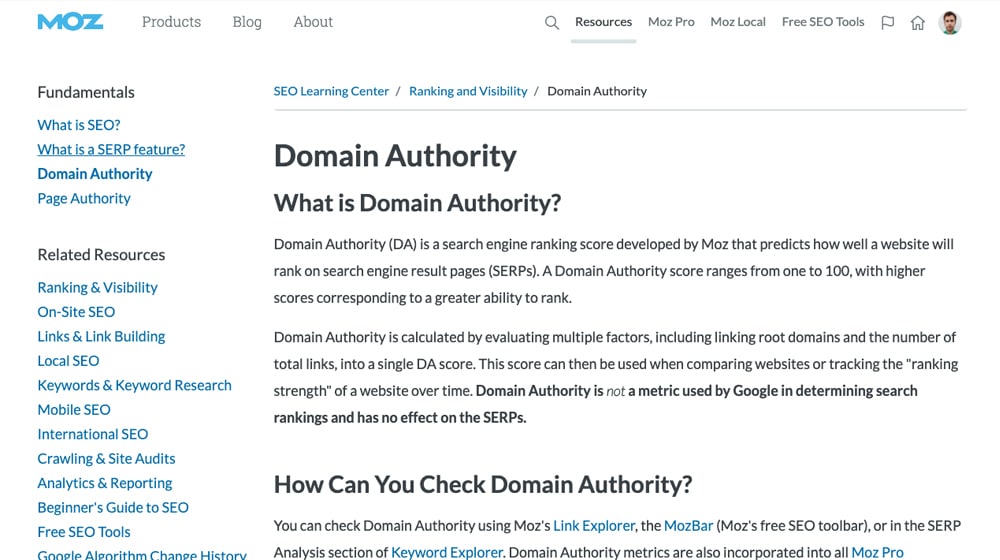 The actual number that Moz gives you for your Domain Authority is a number between 0 and 100, with 100 being the best. This number is on a logarithmic scale, which means it’s exponentially harder to grow X number of points the higher you are up on the scale. Getting a site from 0 to 10 is much easier than getting from 10 to 20, and getting from 90 to 100 is extremely difficult.

Influencing DA is tricky. For one thing, it’s made up of hundreds of different factors Moz keeps track of, including various Google best practices. The primary metric is links; good incoming links from good, high-DA sources are the best. Getting more links from better sources is the best way to grow, both in Google’s ranking and in Moz’s DA.

One thing it’s worth mentioning is that, while hundreds of SEO tools out there use a Moz API key to pull DA and use it to monitor your site, Google does not. Google has its own internal version of the DA calculation, hidden from the public, and Moz’s version is simply the closest accurate prediction they’ve been able to develop.

It’s also worth mentioning that DA is a comparative metric. Here’s how Moz describes it:

“A good metaphor to help understand [DA] is how “best of” rankings work. Let’s look at an example: If Singapore has the best air quality in 2015, and improves it even further in 2016, are they guaranteed to remain at #1? What if Denmark also improves its air quality, or New Zealand (which, say, had been left out of the rankings in 2015) joins the rating system? Maybe countries 2-10 all improved dramatically and Singapore has now fallen to #11, even though they technically got better, not worse. Because there are many factors at play, Singapore’s ranking could change in spite of any action (or inaction) whatsoever on their part.”

What this means is that a website growing is not simply a matter of how their own site is doing, but how sites around them are doing as well. You might improve your site, but if a bunch of other sites also improve, and improve slightly more than you did, your ranking can actually fall. Plus, the top end of the scale can always get even higher up in the rankings. The sites at DA 100 might becomes even MORE 100, making sites under 90 fall, even though they didn’t do anything wrong.

DA is not an absolute ranking and should not be taken as such. Instead, it’s best to use it to compare your site with other, similar sites. Use it to benchmark yourself against your competition, not against big name brands.

My DA Went Up: Is That Good?

Sure! When your DA goes up, a lot of people who use DA as a limiting factor will view your site in a better light. A significant level of growth is a good thing, and a higher DA will always reflect better practices that you’re putting into practice. 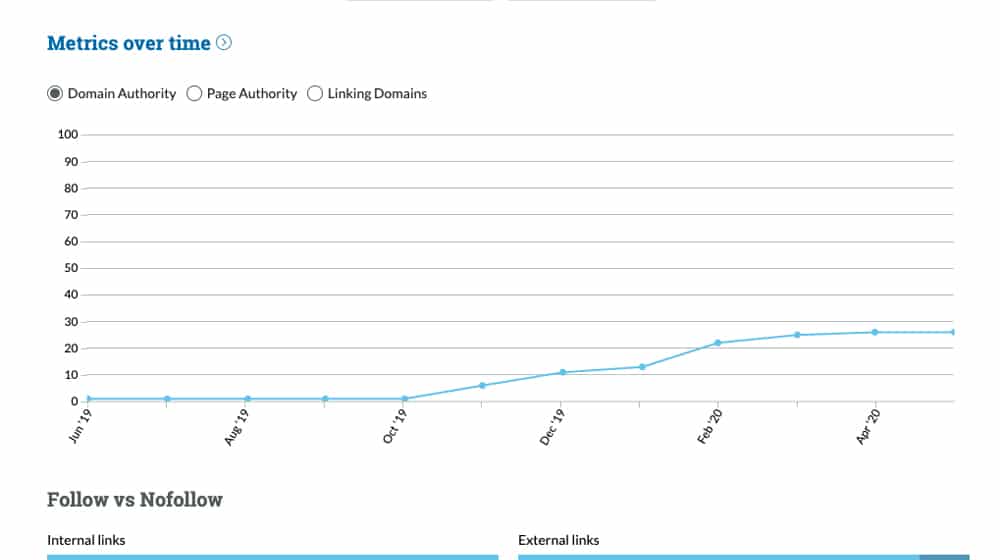 The primary driving factor behind DA is links, though; getting more links from better sources makes your DA grow. Old links disappearing, authority sites removing links to your site, and other such hits to your backlink profile can be damaging to DA, even if it doesn’t damage your Google search ranking all that much.

My DA Went Down: Is That Bad?

If your DA drops, you have to analyze why it dropped, and see if there’s anything you can do to prevent further drops.

90% of the time, if your DA is dropping 1-4 points, it’s nothing to worry about. Again, because DA is a comparative metric, chances are that a drop in your domain authority only means that other sites in your range are growing faster than you are. It doesn’t necessarily mean anything you did made your site worse. More likely, similar websites and  competitors might have had more room to grow in the intervening time than you did.

If you’re getting large drops in DA, like 5-10 points or more, then you might want to worry that some of your backlinks are dropping or being removed. Thankfully, looking into why this happened isn’t all that difficult. It’s more or less the same range of reasons that can drop your Google search rank. Start by looking at your backlink profile, and go from there. Software like Ahrefs will show you a list of lost backlinks over time which is very useful for this purpose.

What is The DA Scale?

The actual scale of Domain Authority is, as I said above, a rating from 0 to 100. 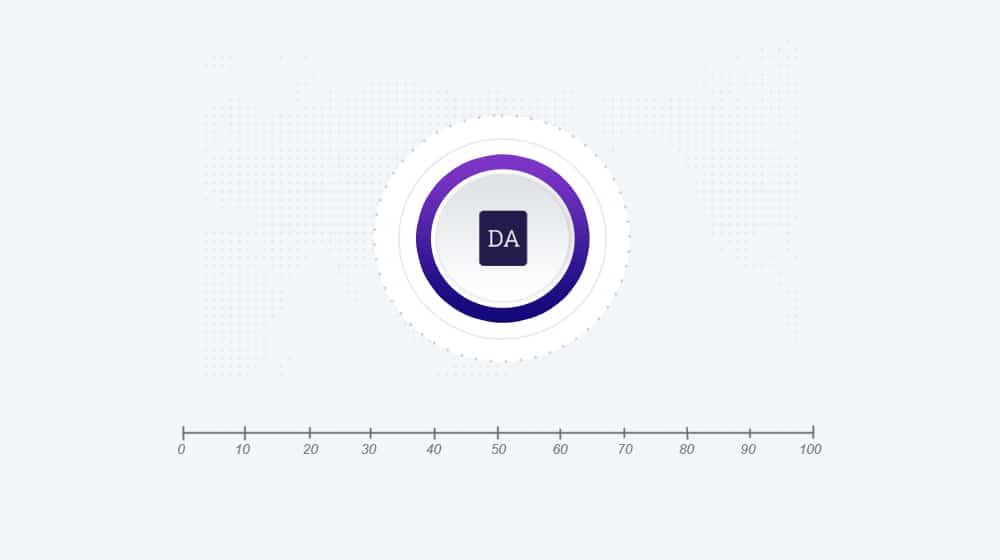 There are no official guide or breakdowns along the way, but here’s the scale that I typically use and find to be pretty consistent.

If you’re interested in your site’s domain authority – and you should be – you can check it. There are a ton of different ways to check, but the easiest is to simply go to the Moz Domain Analysis page here. This is a free and open check for a domain, and it gives you some metrics about a site, though not a ton. You get the DA rating, the number of linking domains, ranking keywords, and a spam score estimate. You also get a list of your top pages, top linking domains, and a bunch of keyword data. 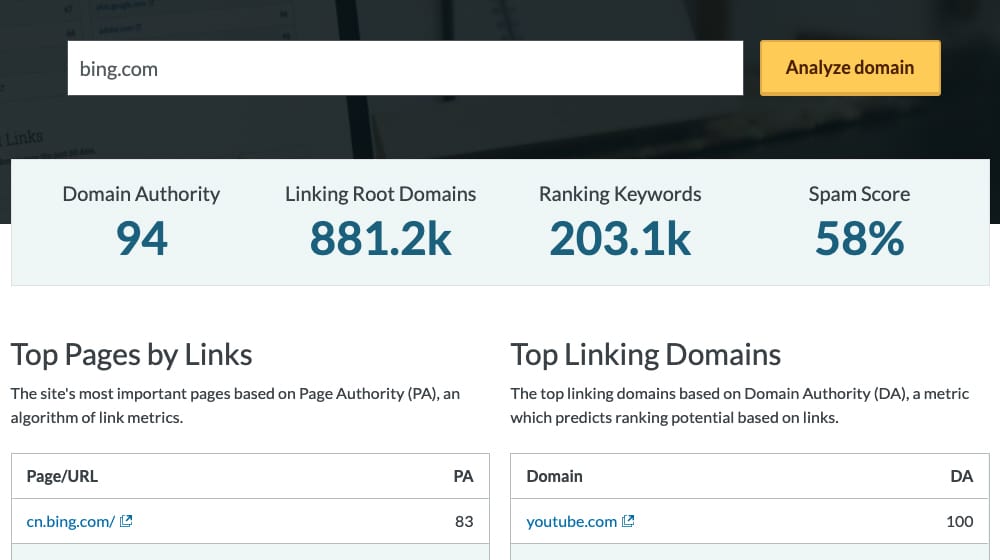 The one reason I don’t necessarily recommend this page is that it has a monthly limit on searches, and it’s low; only 5 or so. To get more, you need to sign up for Moz Pro, though you can register a free trial and cancel when you’re done searching if you want. You can also use any of the many various SEO tools that track DA.

You don’t need to check your DA very often. Moz’s tool gives you the past year of data for free, and paying for an account gets you even more historical data. Additionally, Moz only updates DA about once a month. Your score isn’t going to change from day to day or week to week, so checking it more often than that isn’t going to get you any useful data.

How to Use DA

So you can check your domain authority, but how can you actually use that data?

Use your DA to track your own benchmarking. One of the best uses for domain authority is to keep track of it on your site to see how you’re growing. As I mentioned up above, this isn’t a wholly accurate way to judge growth, because you can still fall in DA while growing as a site simply because the competition around you is growing faster. Still, it’s useful to know what your own DA is (if you check it every couple of months). Moz shows the past 12 months or so of your DA history, so you can see if it rose or fell over time.

Use your DA to open up new opportunities. A lot of people like to gatekeep, and SEO is no different as an industry in that respect. You’ll often find “closed” communities on Facebook or LinkedIn groups that require you to own a DA 40+ site to get access. Some sites limit who can guest post to people who own sites of at least DA 50, and so on. Knowing your DA means you can judge where you fall and how much access you can get to these kinds of communities.

Check your DA against your closest competition. DA can help you judge who your competition really is. You likely have a good idea of the other sites you’re competing against in terms of product and marketing, but by checking DA you might find out that you’re way out of their league, or vice versa. You can use this to see where you stand amongst your industry competition, and what kinds of sites are considered similar to yours. 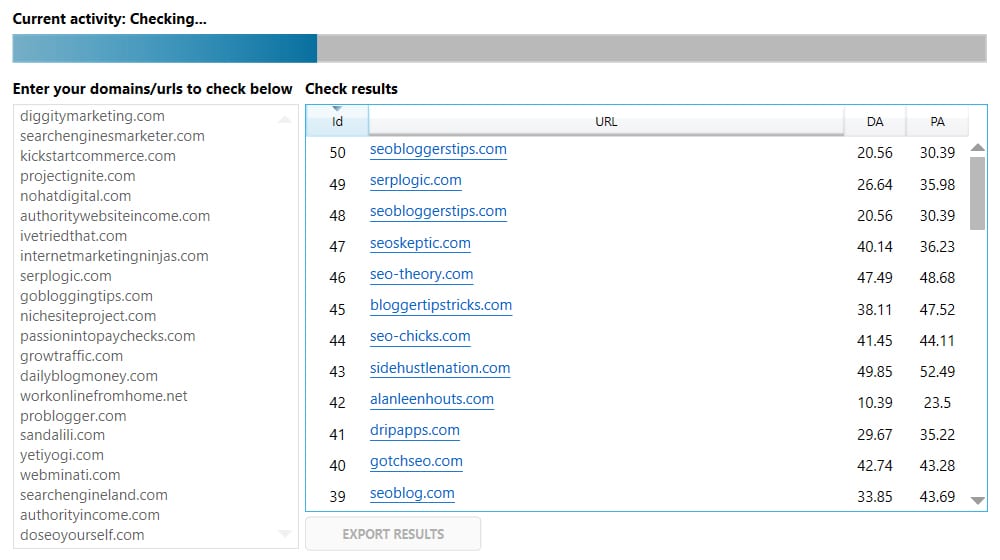 Check the DA for keyword search results to judge keyword difficulty. This is the way I most often use DA. When I’m doing keyword research for a topic, I run Google searches for the topic to see what kinds of content is already out there. Then I check to see what the DA rating is for the sites I see in the results. Obviously, there are always going to be a few 70+ DA sites that I’ll have a hard time competing against, but if the topic isn’t saturated, I may have a chance. If every result on the front page is DA 80+, you know it’s a very difficult keyword to rank for.

Use DA to guide link building outreach efforts. Building up your own DA typically requires you to build links from powerful sources, so websites with a higher DA than your own. Knowing your own DA and knowing the DA of the sites you’re reaching out to can help you identify opportunities and judge the value of a link from, say, a bit of guest post outreach.

Use DA to judge whether to nofollow outbound links. I also often use DA to determine whether or not I should nofollow links I include in my content. Linking to very low DA sites can be risky because those sites could disappear at any time, they could be abandoned, or they could turn into spam sites. This seems to happen disproportionately to very small sites. Sites that have spam or even viruses are risky and harmful to visitors in the eyes of Google, so I’ve found it’s often better to nofollow them until the site has grown enough to be a bit more authoritative. Depending on your tolerance for risk, you can decide where (on the scale) you want to nofollow links.

What about you? How do you use DA? I’m curious about what other kinds of uses people have found for it. Let me know how you check and how you use DA in the comments.

James Parsons is the founder and CEO of Content Powered, a content creation company. He’s been a content marketer for over 10 years and writes for Forbes, Entrepreneur, Inc, and many other publications on blogging and website strategy.

Are You Blogging? You Should Be.

I wrote a 6 part article titled “Why Blog?” that breaks down the stats and facts on why blogging is one of the best marketing investments, period. I guarantee you’ll learn something new. 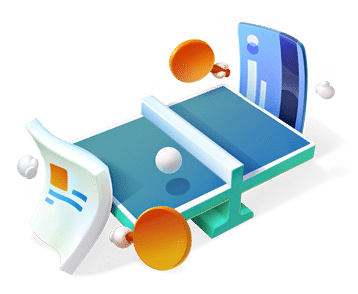 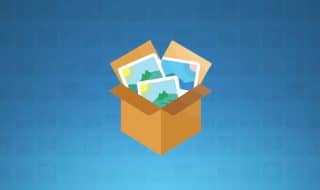 When it comes to blogging, there’s more to it than just text. Good blog posts need images to spice up… 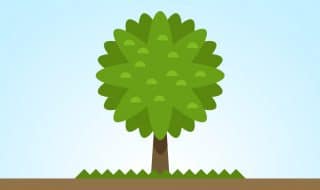 Evergreen content is an open secret to running a successful blog. It’s the core of a solid, long-lasting strategy. It’s… 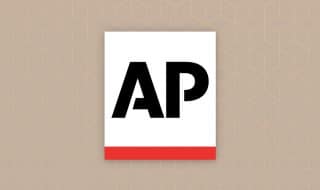 In the world of writing, there are a handful of style guides you can choose from. Some of them are…

Want some free consulting? Let’s hop on a call and talk about what we can do to help.

Schedule a call or send a message